The 17+ mile walk to Logrono today was long, but very enjoyable thanks to flats stretches, good weather, interesting sites, and great company.

Started the day with a chance meeting at breakfast with Hans from Australia who I last saw before I took my first steps on Day 1. We arranged to meet in the square at Logrono for a beer at the end of the walk to share our experiences of week 1. Though out the day, I ran into a number of pilgrims that I have met over the past week. Toward the end of the walk, my energy was flagging, but I was fortunate to meet Jared from Dublin. We had a great discussion that really helped pass the last tough 3-4 miles.

Had some interesting experiences along the way starting with the small hill town of Sansol. I met Father Dominic who was waiting to be let into church so he could say a morning mass. He lived in the states for a period so his English was excellent. I could not stay for mass, but ducked in to say a prayer. Fortunately, I stayed long enough to hear Father Dominic ask the handful of those attending whether they would prefer the mass to be said in Spanish, French or English…that is full service!

In nearby Torres de Rio, I stopped at a very small, but well-preserved octogon church built in the 1200’s. The design suggests that the church served pilgrims in the Middle Ages as a lighthouse and site for funeral masses (yikes!). Later in the day, I reached Viana where the locals were showing off their local produce of wine and olives which unfortunately were not being served until the noon mass was completed.

Some final thoughts on the day. The Camino de Santiago feels like a river flowing west that I am swimming in each day…sometimes slowly and sometimes more quickly. In the ebb and flow, I connect, disconnect and reconnect with other pilgrims. Each person I meet, and even those I only observe, have something to offer. Case in point…at the mid-point today I stopped to address a potential blister. While I was attending to my foot, I noticed a older fellow sitting on a bench with a prosthetic leg. After a time he raised himself and went over to a bike that was packed out for the pilgrimage. He mounted the cycle and rode off. Needless to say, I felt less concerned about my feet.

I have the day off tomorrow…staying in the fairly large city of Logrono for an extra day to rest up. 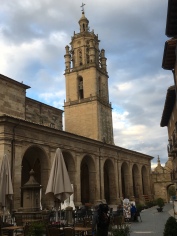 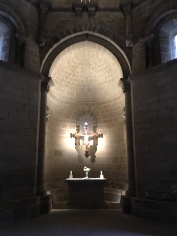