What an amazing day on the Camino!

I knew today would be tough since the hike called for 12 miles of relatively flat trekking followed by a 6 mile climb to one of the highest peaks on the Camino to the village of O’Cebreiro. The challenging hike was complicated by 5-6 rain showers throughout the day with a large cloud actually enveloping O’Cebreiro by late afternoon adding an eerie quality to this ancient village.

I had the good fortune to connect with a pilgrim early in the walk which made the day go very quickly. Nate is a recent graduate from a Big East college who I learned is entering the Dominican order as a “novice” in August.  The unbelievable coincidence is that he will be doing his first year in a parish about 3 miles from where I live in Cincinnati! We ended up walking together all day and having dinner in O’Cebreiro. Happened to run into Cory and Felix who I have not seen since Leon which was extra special. One final note – I have to give Nate bonus pilgrim points for walking the ~19 miles today in sandals; quite a feat given the steep trail and persistent presence of horse manure on the trail over the last 6 miles! :-s

I had another first on the Camino today. I met a young couple from the US walking the Camino with their baby son! The baby appears to be about a year old and is a chunky little guy. His father is carrying him, while his mother carries a pack with their collective belongings. Wow!

Also was able to attend the pilgrim mass at the Iglesia de Santa Maria Real — one of oldest churches on the Camino tracing its construction to the 9th century. Readings were done by pilgrims in multiple languages and the young priest even had his homily reading in English! At the end of mass, the priest had about 50 pilgrims surround the alter where he gave us blessing/hug and nice Camino keepsake – very touching and memorable.

My only disappointment from the day is that I have reached my third significant peak on the Camino under foggy conditions. Perhaps tomorrow will provide an opportunity for better pictures on my way to Triacastela. 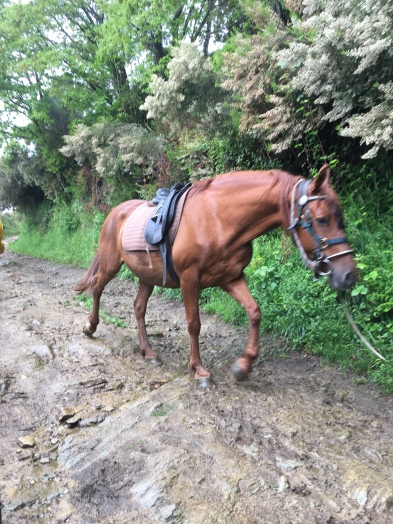 2 thoughts on “Day 31 – Villafranca to O’Cebreiro”